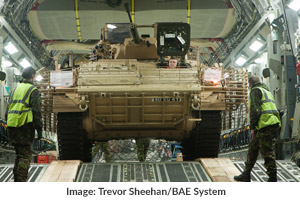 Some of the Group’s most significant work has been with the Ministry of Defence, where Tinsley Bridge, along with the MoD’s prime contractor BAE Systems, developed an upgrade to the British Army Warrior Infantry Fighting Vehicles currently deployed on the front line in Afghanistan. The improvements to the vehicle suspension have already protected troops in IED strikes in Helmand this year.

This has been noted by Minister for Defence Equipment and Support, Peter Luff, who has said: “Warrior vehicles are doing a tremendous job in Afghanistan and these numerous improvements are already proving their worth in theatre. This vehicle is extremely versatile, offering good mobility and high levels of protection for its crew. It also allows troops to get out into communities safely, maintain areas and provide reassurance to the local population.”

BAE Systems approached Tinsley Bridge to see if there was a way to develop the vehicle suspension and raise the ride height of the vehicle at its increased protection weight. Limiting vehicle suspension component changes and within a very tight timescale the objective was to maintain mobility whilst significantly reducing the impact of land mines.

In a development project between the two companies, a new high-strength steel, Extralite™, was proposed to replace the standard steel suspension torsion bar. The steel was initially developed by Tinsley Bridge for use in high strength leaf springs where the steel was used mainly in ‘tension’.

Development and testing of the torsion bars was completed in less than 5 months; a time frame which included extensive field trials conducted by the Army. This urgency for the project was dictated by the requirement to improve the mobility of the armoured personnel carriers, as their ongoing deployment necessitated an almost immediate upgrade.

The vehicle now features improved cross-country mobility, ride and handling to work at its best in the challenging Afghan terrain, and the extra height also improves crew protection from mine blast. The Extralite™ steel used is now part of a patent application made by the Group.

The Warrior is a specialist tracked infantry vehicle and so can get to places that wheeled vehicles cannot, enabling the troops to deploy more effectively in difficult terrain.